What Does It Mean To Take Refuge in the Three Jewels? 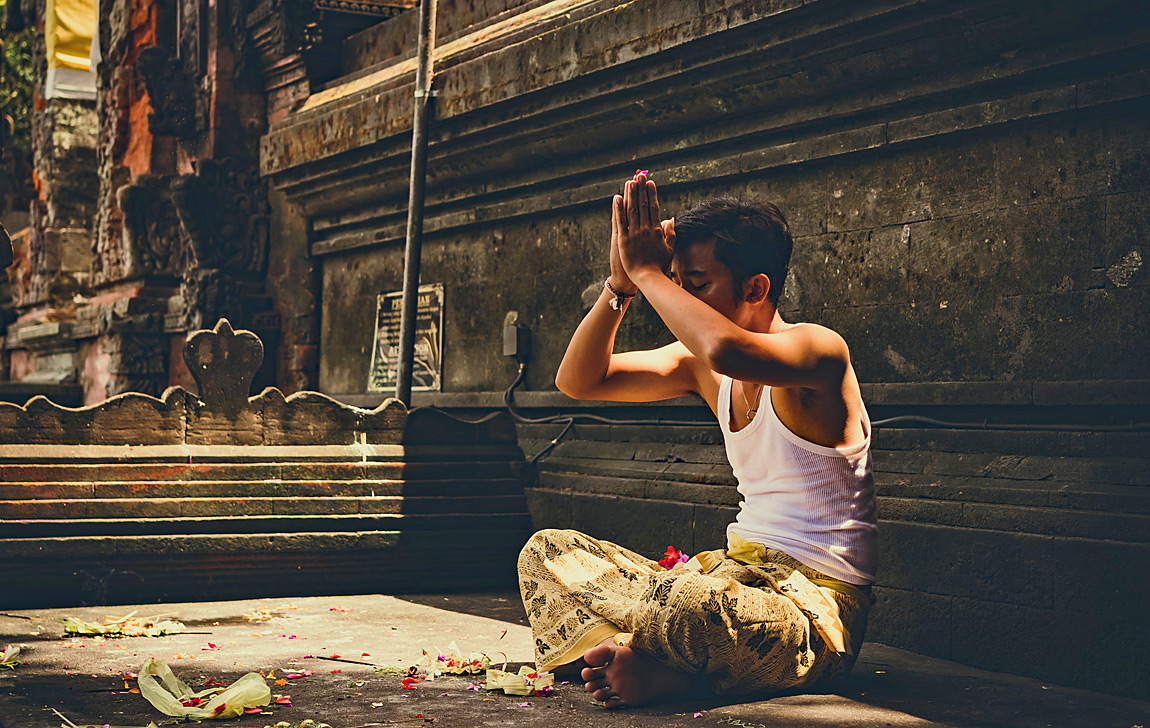 Familiar words to anyone who has spent time in a Buddhist context, but not easily understood. What are these “Three Jewels,” the cornerstones of a spiritual life according to Buddhism? What does it mean to take refuge in something? Is it just an old religious tradition or some sort of blind faith?

The idea of “taking refuge” is so important in Buddhism that you can say the definition of a Buddhist is someone who takes refuge in the Three Jewels.

Refuge taking is actually a profound and deeply personal action, resonating on many different layers of meaning. It brings us to the core of why we practice and how to live our lives in harmony with higher principles.

What do you take refuge in?

In a way, we can see that our spiritual maturity is reflected in what we place our highest trust in, where we believe our safety and happiness really comes from.

When we’re children, we take refuge in our parents. We believe that no matter what goes wrong, Mom and Dad can fix it, like they have the final say on reality. (If we come from a healthy family, at least.)

But when we start to look deeper, it becomes clear that none of these things can help us ultimately.

People die, no matter how good their doctors are.

What happens to that career you sacrificed so much for? Gone, over and forgotten as soon as you retire.

Your social identity is just a role you’re playing in certain circumstances. It changes.

The world has plenty of people with money, status and all the best material stuff, who are profoundly unhappy.

So where do we put our trust?

As spiritual seekers, we place our trust in the highest reality, the absolute that lies at the heart of everything in this world.

This is a trust that goes beyond trust in any particular circumstance or outcome. It is a trust that allows us to go beyond attachment to success or failure, good or bad experiences.

It is the trust of the Buddha sitting quietly under the tree while Mara hurled arrows at him, or the first Panchen Lama walking between two opposing armies to stop the fighting. It is a form of surrendering that actually brings tremendous power.

In Buddhism, practitioners trust or take refuge in the ultimate reality as expressed as the Three Jewels: the Buddha, Dharma and Sangha.

What it means to take refuge in the Three Jewels

What exactly are these three concepts in which practitioners are supposed to place such an absolute faith?

There are many different ways to interpret them, and levels of meaning that can play simultaneously. 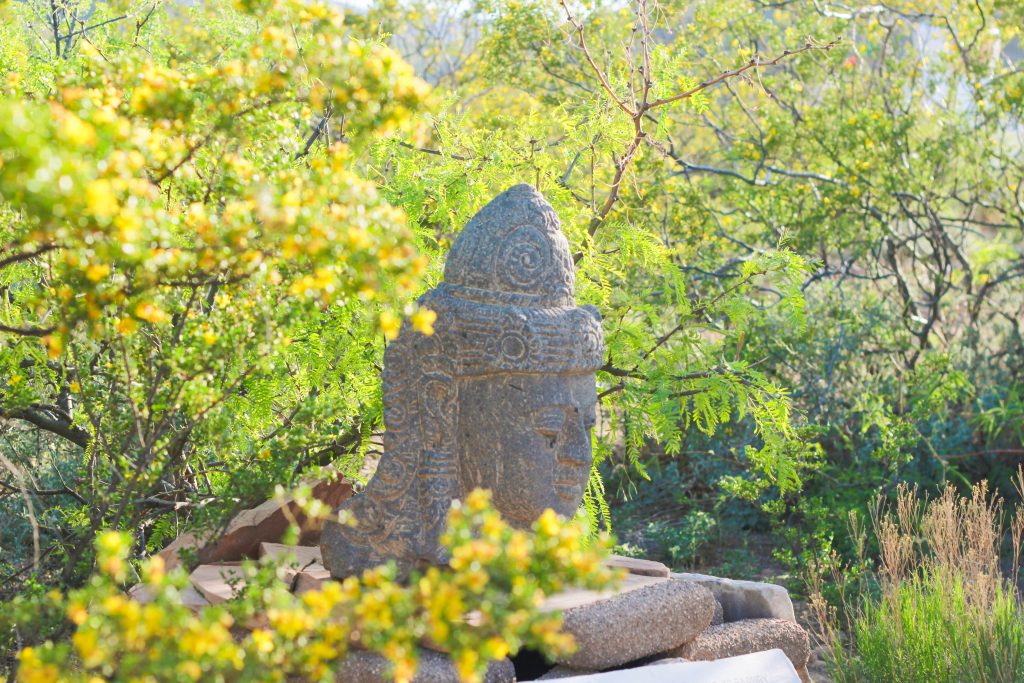 Most traditionally, the Buddha Jewel refers to the historical Buddha. However, it can also refer to your teacher, whoever in your life most represents for you the consciousness of an enlightened being.

Every word and every action becomes charged with meaning, when you are looking for it.

On the most profound level, you can take refuge in your own enlightened potential. Recognize that your nature is Buddha-nature: it’s the same lack of inherent identity. This is what makes it possible for you to become a Buddha.

When you take Buddhahood as the ultimate goal of your life, everything else tends to fall into place around it. 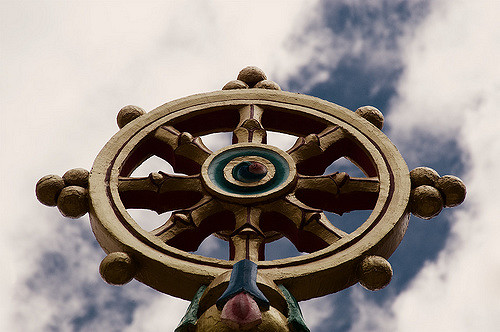 Dharma is the path, the way to realization and also the truth that is realized. Specifically, it is the Buddhist teachings that guide towards true wisdom and the awakening of compassion.

When we take refuge in the Dharma, we surrender our conventional understanding of reality to a higher view. It is a commitment to remember that no matter what happens in our lives, it is all a part of this path. Rather than getting swept away in the story, we can choose to act in accordance with our higher principles. (Or at least make an honest effort towards this.)

This requires acknowledging that all the external things in our lives, that we usually run after or blame for our problems, actually aren’t the cause of our happiness or unhappiness. They are only the agents. The real cause comes from within ourselves: our own mental conditions and reactions, and ultimately, according to Buddhist wisdom, reflections of how we have treated others in the past.

It’s definitely a call to step up a bit. If I believe this, I can’t blame my boss or my parents or my boyfriend for making me unhappy anymore. Only I am responsible for my own happiness. And what’s more, if I’m following the path of the bodhisattva, I take responsibility for their happiness too!

Taking refuge in the Dharma can be more personal than simply accepting a set of teachings and scriptures. The “Dharma” also refers to your own inner wisdom, your innate understanding of the truth or “inner guru” that guides your evolution even if you aren’t aware of it. 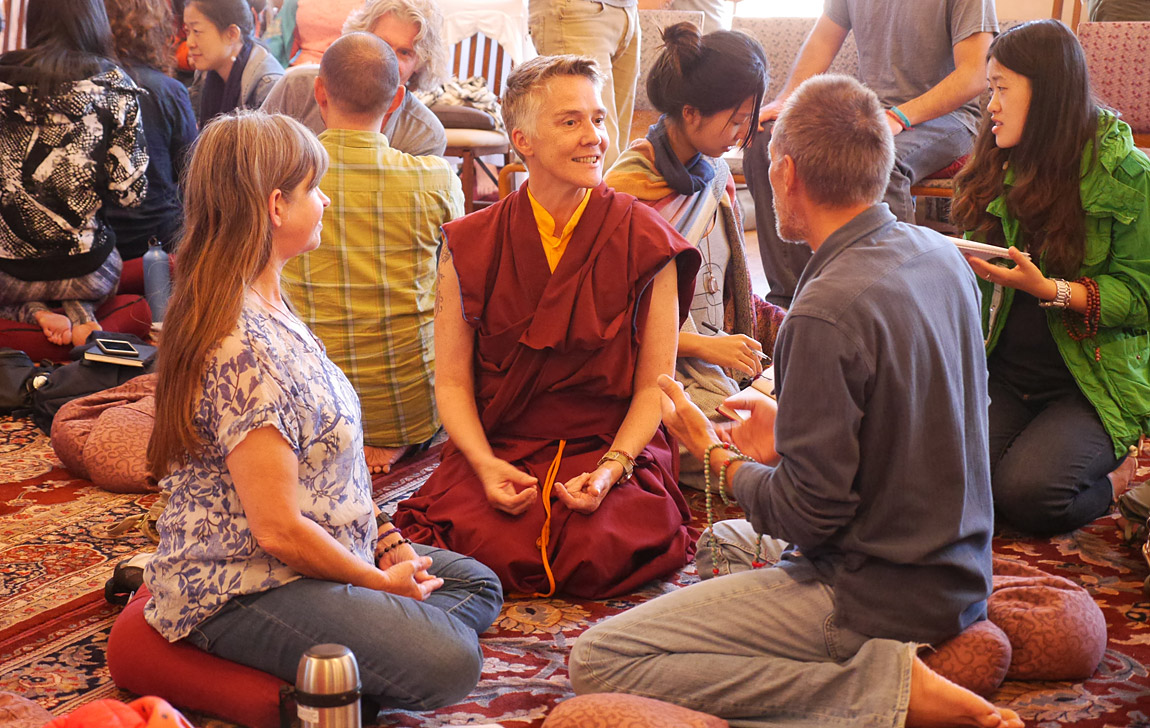 The third Jewel is the Sangha, the spiritual community.

The Sangha is traditionally any group of ordained monks or nuns, but especially the community of monks who lived around the Buddha. These people, who devote their lives entirely to cultivating wisdom and compassion, are seen as ideal role models for other practitioners.

Your sangha, on the other hand, might be the group of people you study dharma or meditate with.

This is one of the Three Jewels because it is one of the most important elements of a spiritual life. If you’re out there on your own, it’s incredibly hard to stay constant and overcome difficulties.

A group of people who are on the path together can support, encourage, inspire and mirror each other. Most importantly, they hold a space for each other to live according to their deeper understanding.

Finally, you can take refuge in the Sangha as the community of all enlightened beings.

Refuge in this Sangha means acknowledging the presence of these beings, honoring them as role models and trusting them to help you in whatever way you are open for.

The Three Jewels as body, speech and mind

By the division of “body, speech and mind” that represent a complete being, the Buddha Jewel corresponds to the mind, the Dharma Jewel to speech, and the Sangha Jewel to the body.

Tibetan Buddhism defines three formulations for taking refuge: the outer, the inner and the secret.

The outer form is the Three Jewels proper: Buddha, Dharma and Sangha.

The inner form, or the “Three Roots,” is the lama or heart teacher, the practitioner’s chosen deity, and the dakinis.

The secret form is the Dharmakaya, Sambhogakaya and Nirmanakaya, the Trikaya or “Three Bodies” of a Buddha.

What taking refuge is not

The idea of taking refuge can create some confusion initially, even misconceptions that run precisely opposite to the deeper meaning of this practice.

Taking refuge does not mean handing responsibility over to some higher being. When we take refuge in the Buddha, we don’t think that Siddhartha Gautama is going to swoop in from heaven and solve all of our problems.

In fact, we are taking refuge in our own enlightened potential. This actually means accepting a much higher responsibility, since we recognize what we are capable of becoming and commit to reach nothing short of that. It is a reminder to seek our own greatest possibility.

Taking refuge also does not mean that nothing that happens in your life matters, because you only care about the absolute.

On the contrary, when we understand the relationship between the ultimate reality and the conventional world, we realize that everything matters so much more.

Finally, taking refuge does not mean we only care about some limited community of spiritual people, as if beings at a lower level of consciousness aren’t worth our attention.

It is actually a gesture towards recognizing a universal sangha, the capacity of every single being to act as our greatest teacher – if we are only willing to listen to what they have to teach us.

How can taking refuge become a part of my life?

There are many ways to bring into your life this sense of surrender and trust in the ultimate reality, in the form of the Three Jewels.

You can take refuge in the Three Jewels in a formal way as part of a ceremony, where you also commit to following the Five Lay Precepts: no killing, no stealing, no telling lies, no sensuous misconduct and no consuming intoxicants.

This ritual, which must be led by a qualified teacher, is actually the way to become a Buddhist “officially.”

In your daily life, you can begin your meditations by invoking the Buddha, Dharma and Sangha, feeling reverence and asking for the support of what they represent.

And as you go about your life, take refuge in your higher wisdom as much as possible. Remember why you are here, what you are and what you can become.